de it en
Book
The history

No one is quite certain any more how long the Weisses Kreuz in Burgeis has been around. Whether a village store, inn or family-run hotel – our building has always been a place where people meet and feel welcome. The Weisses Kreuz in Burgeis reflects its rich history and the moving stories it has played host to. These stories involve shrewd traveling merchants, great love, upsetting loss and brave young women. The history of the building cannot be separated from the history of the Theiner family. The past meets the future in our traditional family-run hotel. A holiday in the Venosta Valley region always involves something of a step back in time – without ever leaving the comforts of our contemporary world. Would you care to accompany us as we take a walk down memory lane?

Scroll
1871
The “Pedlars” and the Weisses Kreuz

By the time the clever and hardworking Josef Theiner bought the Weisses Kreuz on the village square in Burgeis in 1871, including the attached farmland, he had already become a moderately wealthy man in the generally poor region of Upper Venosta Valley. He had earned his money as a pedlar and the owner of a small shop. The Weisses Kreuz in Burgeis is just one of many buildings with that name in the Venosta Valley region. It lies, as do the rest, on the Via Claudia Augusta, a legendary trade route from the Roman era. It is believed that Weisses Kreuz was established hundreds of years ago as a hostel. Josef Theiner renovated a part of the building, turning it into a village shop. Even today, the residents of Burgeis/Burgusio call the Theiner family “the pedlars”. 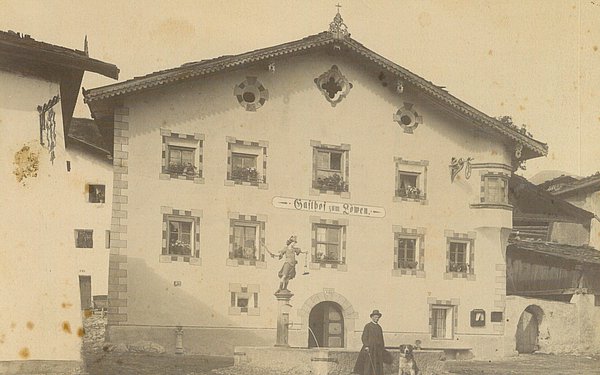 Despite two terrible wars and the most adverse circumstances, the “pedlars” managed to keep expanding their business. Heinrich Theiner took over the business when he was only 22 years old. In the 1950s, the Weisses Kreuz in Burgeis consisted of a modern farm, a large village shop, a flourishing business selling wine and an inn that was known throughout the region. 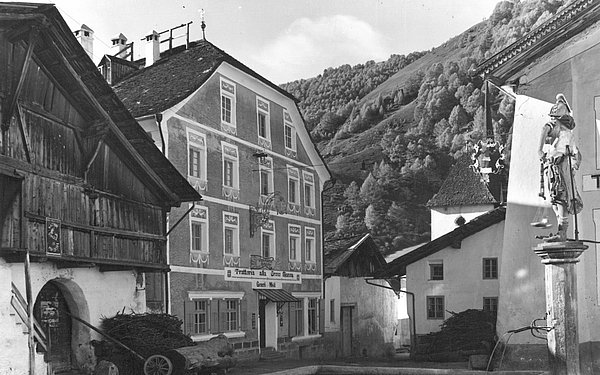 On 1 October 1950, Maria Blaas, a farmer’s daughter from the small neighbouring village of Plagött, began her apprenticeship as a salesgirl at the Weisses Kreuz in Burgeis. She would have preferred to earn her living as a nanny in worldly Milan. But her mother knew well enough to nip that plan in the bud and sent her to the “pedlars” instead. Young Kurt Theiner was taken with Maria straight away, but after her apprenticeship she left for Innsbruck, where she attended a domestic science training college. Kurt would not let go, writing her countless letters and even setting out on the long trip to Innsbruck – simply to beg his beloved to come back with him to Burgeis. And he won her over. The two wed, assumed the mantle at the Weisses Kreuz in Burgeis and had four children: Beate, Elke, Thomas und Joachim. 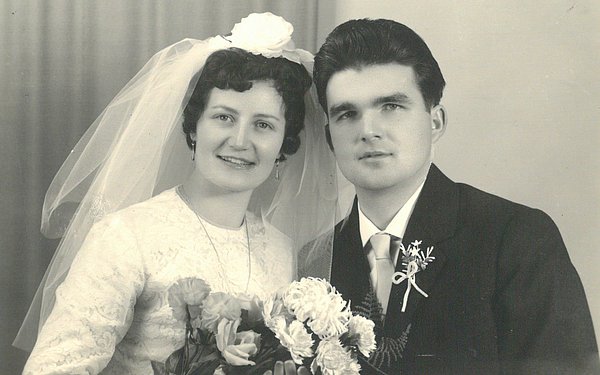 Maria Theiner has never stopped waxing lyrical about her beloved Kurt, about the endearing, kind man he was. And a motivated business man to boot. Kurt Theiner was the most forward-thinking entrepreneur in the whole region of Upper Venosta Valley. In the mid-1960s he was already thinking about installing an indoor swimming pool – at a time when some in the village still had no indoor plumbing. The Weisses Kreuz in Burgeis mixed modern amenities with charming country life: the village’s first telephone was installed here. But it was the motor car that caused the biggest sensation. The Theiners were without a doubt the first to enjoy travelling through Upper Venosta Valley by car. 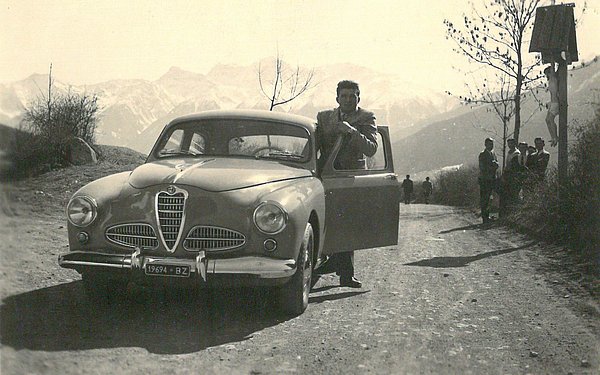 1964
The Guests Arrive – Finally, a Holiday in Venosta Valley

Expansion continued at the Weisses Kreuz in Burgeis. Kurt and Maria Theiner gave up the farmland and modernised the inn and business. Tourism was starting to gain momentum in the Upper Venosta Valley region. At this point, there were seven rooms at the Weisses Kreuz, which were primarily taken by traveling merchants. But an ever-growing number of Italians from the cities were drawn to the area in the summer. The Descari family from Milan were among the first holiday guests at the Weisses Kreuz in Burgeis – for fifteen years, it was here in Venosta Valley that they spent their holidays. 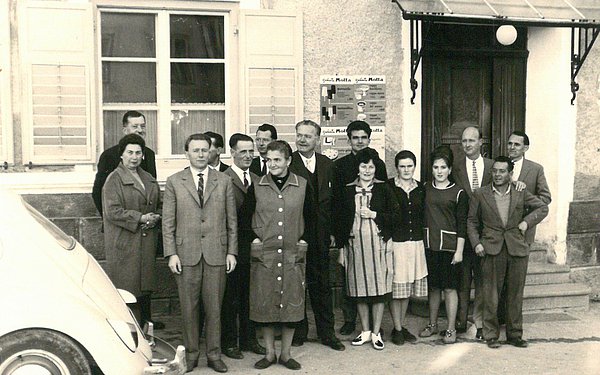 What began as a light-hearted family ski outing ended in tragedy. Kurt Theiner suffered severe internal injuries following what had appeared to be a harmless fall. He immediately underwent an operation and was recovering well. His death was completely unexpected. Kurt died of an embolism at the young age of 32. Maria Theiner suddenly found herself a widow, forced to take care of four children and the business alone. The brave young woman worked tirelessly. She can still recall the first thing she did after assuming the reins at the Hotel Weisses Kreuz in Burgeis: a hand-written letter to a German tour group. 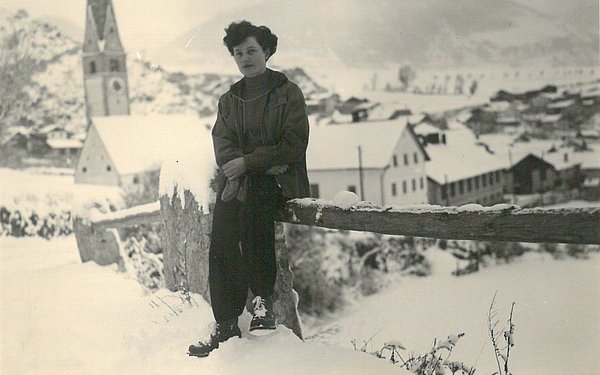 1974
The Most Beautiful House Near and Far

Four years later, Maria the police officer Karl Theiner found his was to her side. The shared family name is a coincidence, but not a real surprise: there are plenty of Theiners in and around Burgeis. Karl began helping with the business, quickly becoming a close friend and eventually, Maria’s new love. He too was a man with a vision and planned to open a bar. To finance this plan, he sold his inheritance to his partner: an old house directly across the street. Sagging walls, creaky wooden beams and broken windows – the building was badly run down. But there was still something magical about it. Maria Theiner hired a surveyor to appraise the 800-year-old house. The expert’s assessment caused something of a stir: it is one of the most beautiful houses, if not the most beautiful, in all of the Venosta Valley region. 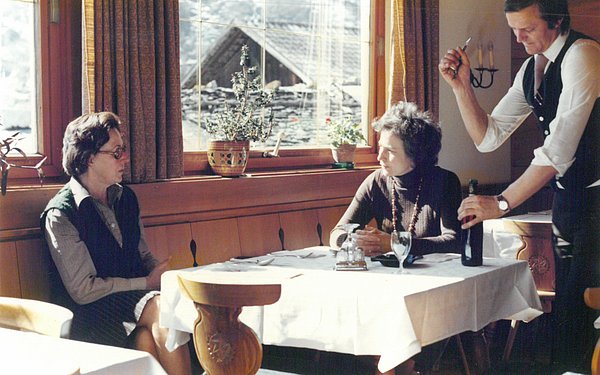 1985
A Change of Generations

Maria Theiner left the Weisses Kreuz in Burgeis to her sons. Thomas Theiner assumed the mantle at the family-run hotel while his brother Joachim took over running the store. 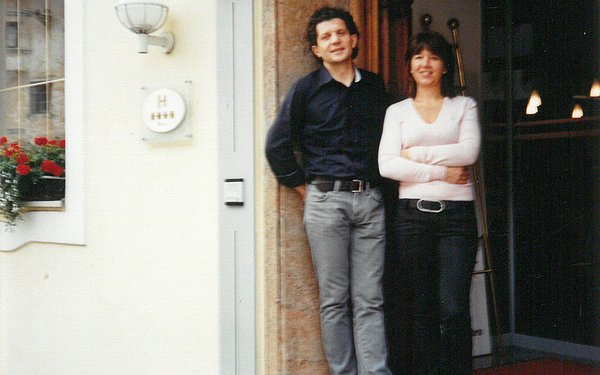 Kurt Theiner’s dream of a pool finally became a reality. Some forty years after he first floated his plans, his children built the indoor pool. They also added to the Weisses Kreuz in Burgeis a large wellness area and an underground car park. 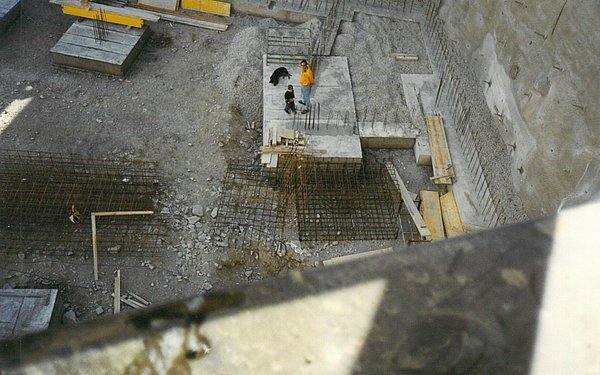 The “pedlars” proved their pioneering spirit yet again. In an unprecedented move, the 800-year-old Mansion zum Löwen was gently shaken awake from its long slumber. Thomas and Joachim Theiner spared no cost or effort in breathing new life into the most beautiful house in Venosta Valley. The architects Stephan Marx and Elke Ladurner worked closely with the South Tyrol office for the preservation of historical monuments to create a unique symbiosis between the historical structure and contemporary architecture. 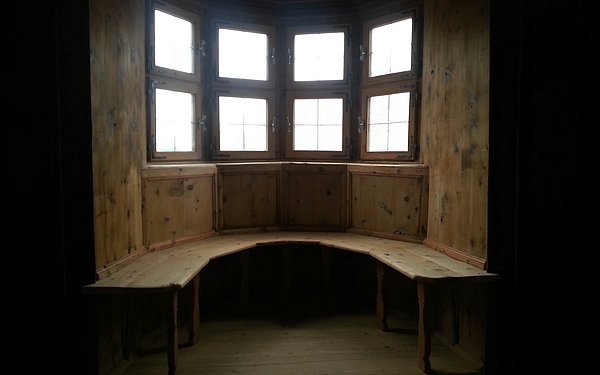 Renovations were underway at the Hotel Weisses Kreuz too. From the reception area, bar and restaurants above the wellness and beauty areas to the rooms and suites, the Theiner family modernised the Weisses Kreuz in Burgeis from the ground up. The history and stories associated with this traditional family-run hotel took centre stage in the new design plans. Elements of modern architecture blended in seamlessly and with an assured sense of style. The Hotel Weisses Kreuz and the Mansion zum Löwen “grew together” and formed, together with the adjacent village square, the centre of Burgeis/Burgusio. The overall concept was well received amongst experts. The careful reactivation and sophisticated renovation have won a number of awards and prizes. 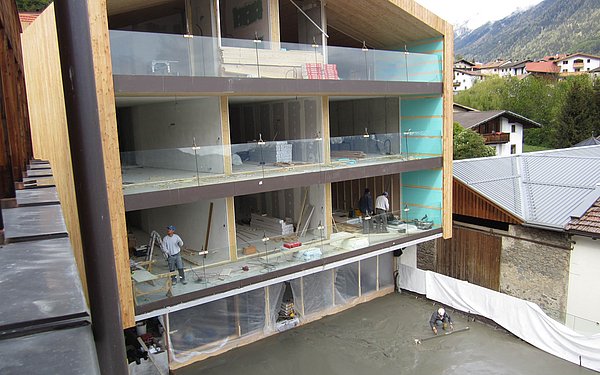 Now with Mara Theiner, another young woman has assumed the reins at this family-owned hotel. After finishing her training at the Landeshotelfachschule Kaiserhof (college of hospitality), Mara took to the road with her partner Marc. Learning from the best and becoming better yourself – the two gained familiarity and fell in love with the world of fine dining in Kitzbühel, Zürich and Lech am Arlberg. Now they have come back home – where they are actively supported by Mara’s grandmother Maria, father Thomas, mother Marlene, uncle Joachim and aunts Beate and Justa. 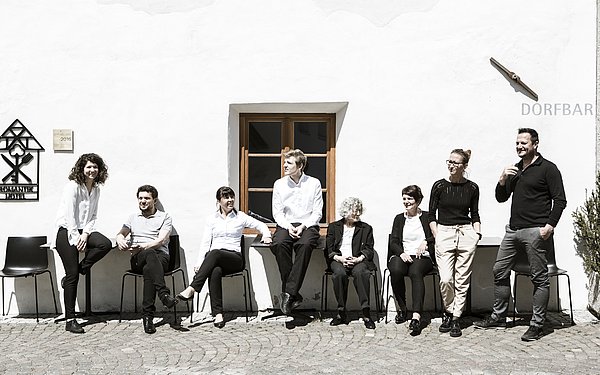 2022
More Weisses Kreuz than ever before

When visions become reality, everything we have been wishing for for so long finally comes true.  With subtlety and a flair of mindfulness Mara Theiner and Marc Bernhart have given your well-being and indulgence even more room. The 20-metre-long infinity pool, the new garden and the light-flooded conservatory promise moments of recreational quiet and pure well-being. Furthermore, a gym and a serene yoga and meditation room have been added to the existing amenities. Fine dining on the highest level is celebrated in the new gourmet restaurant mamesa according to the restaurant’s principle of „Six tables. Five senses. Countless flavours, textures and surprising interpretations.” 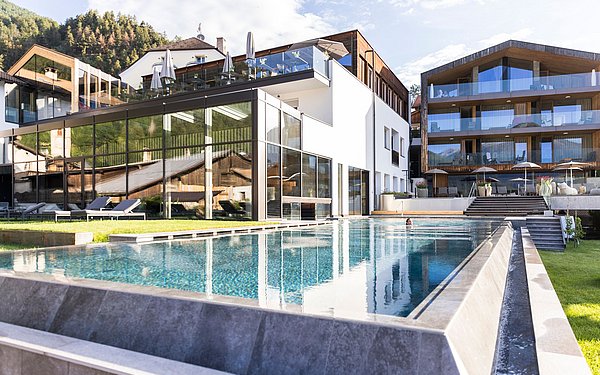